I've wondered this for a while.

Studying carefully the Collins Spanish Dictionary entry for parecer, the answer would appear to be that you would use "parecer" (and not "parecerse") if you are saying someone or something looks like some other kind of person or thing ("that cloud looks like a castle" [esa nube parece un castillo], "she looks like a doctor" [ella parece una médica], "this looks like spaghetti" [estos parecen espaguetis]).

If, however, you are saying that someone or something looks like some other specific person or thing, then you would use "parecerse" ("she looks like my sister" [se parece a mi hermana], "their robot looks like Eddy" [su robot se parece a Eddy], "they look alike" [se parecen], "he doesn't look like his picture" [no se parece a su foto]).
Posted by joaquimoly at 12/09/2011 11:46:00 AM 0 comments

What does "irse de pinta" mean?

"I will see you later" in Spanish

How do you say "I will see you later" in Spanish?

Usually, "hasta luego" (until later). This is different from "adiós" (good-bye), which is what you say without any expectation that you will be seeing someone later, for whatever reason.

I found a great postcard once, by Ann Taintor, with a smiling señorita and the caption "her lips said 'adios'...but her eyes said 'hasta luego.'" : ) 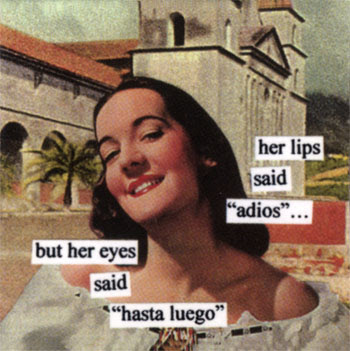 Unfortunately for Spanish teachers everywhere, at last check, this did not seem to be available any longer. If you find out different, let me know!
Posted by joaquimoly at 2/13/2011 08:09:00 AM 0 comments

"I miss you" in Spanish

How do you say "I miss you" in Spanish?

Email ThisBlogThis!Share to TwitterShare to FacebookShare to Pinterest
Labels: "I miss you", I miss you in Spanish, me haces falta, Spanish, te extraño

"I love you" in Spanish

What is the best way to say "I love you" in Spanish?

Email ThisBlogThis!Share to TwitterShare to FacebookShare to Pinterest
Labels: "I love you", "te amo", "te quiero", I love you in Spanish, Spanish

If you have a question about Spanish, let me know. If it something I know the answer to, and that would be of interest to a general audience, I will try to post the answer here. If I think of something new and/or interesting about Spanish, I will post that here, too. I hope you will find this blog helpful and interesting!
Posted by joaquimoly at 8/31/2010 12:00:00 AM 0 comments